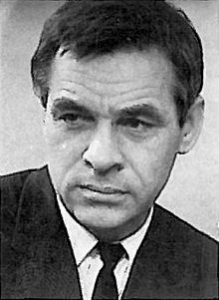 Georgy Petrov Bozhinov was born on the 27th of January 1924 in the village of Kriva Bara, of Lom region, in the family of farmers. His father, Peter Bozhinov, was the village mayor during Stamboliyski’s time, with all the consequences thereof: imprisonment and a tour in a barge down the Danube.

Georgy Bozhinov graduated from Lom’s famous Classical Middle School. His schooldays coincided with the years of the Second World War. He diligently studied German in order to read Schiller and Haine in the original.

In 1946, he became a student of philosophy in the University of Sofia “St. Clement of Ohrid,” and his second speciality was a Russian philology. In order to earn his living, he worked as a porter at the Freight Station of Sofia. After his graduation, he became a teacher in Russian in the Agricultural Technical School in Pazardzhik. In 1953, he married Minka Glutnikova, an agronomist and a probationer in Pazardzhik. The same year he bought his typewriter—“Olympia”—which he never abandoned, just as he never took leave of his wife, to the last day of his life.

During the 1950s, Bozhinov became BTA’s correspondent for the region of Blagoevgrad. Later, he was also a correspondent for the Literary Front newspaper. He succeeded in publishing two books with travel notes and documentary stories in the state’s publishing house “Bulgarian Writer”—“Deep in the Dikcham Forest” and “Yulen”: an echo of his wanderings around the mountains of Pirin and the Rhodopes. After the birth of their second daughter, the whole family moved to the village of Maglizh, Kazanluk region, and G. Bozhinov became a correspondent for the Fatherland Front newspaper. In these years, he studied the Central Balkan mountain and the Elena regions, and was working on his book “Green Forest and Cold Water,” which was published many years later under the title “The Calling Cuckoo,” and the documentary novel “The Karadzha.”

In the 1970s, Georgy Bozhinov returned one more time to Blagoevgrad, now as a correspondent for the Trud (“Labour”) newspaper. In the magazine September, however, the bomb was already set and was quietly ticking, till it finally exploded in March 1975, with the publication of Bozhinov’s travel notes “Green Forest and Cold Water.” As a result, Bozhinov was dismissed from the Labour newspaper, expelled from the Union of Bulgarian Journalists, and from the Blagoevgrad Writers’ Fellowship. Never again was he appointed to a state job. In these years, he finished writing “Green Forest and Cold Water,” and began writing his novel “The Kalunya Citadel.” During his lifetime, he was able to publish also “The Grey Drifter,” “Cherry Waters” and “The Calling Cuckoo.” His few friends used to call him “a martyr for literature’s sake.” G. Bozhinov died on the 25th of May 2004.